Who was Andre the Giant? 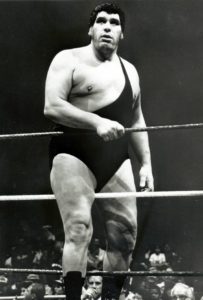 The series of legendary giants begins with one of the most emblematic of them: André the Giant. He is not very well known in France, except by fans of American culture or US wrestling, but he has deeply marked the Americans with his presence.

Where does Andre the Giant come from?

Andre the Giant was born in France. He was born on 19 May
1946 in Coulommiers in Seine et Marne. His parents were of Bulgarian origin on his father’s side and Polish on his mother’s. Before becoming Andre the giant he was called André Roussimoff. Many (erroneous) sources have him born in Grenoble (some explanations on this link in french).

How tall was Andre the Giant?

Officially and according to the WWE, Andre the Giant was 7″3, wore size 23 and weighed up to 550 pounds. For the last two points, no problem, for the first one, it’s up for discussion. Being an undisputed star of the wrestling federation, and having the nickname of giant, he had to be, as much as possible. In reality, Andre was more like 6’11”. An amateur video has been made comparing him to basketball legend Wilt Chamberlain and Arnold Schwarzenegger (see this link). 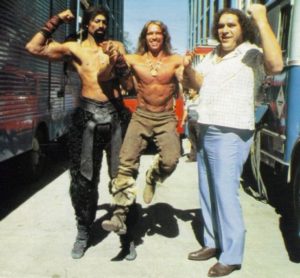 Andre has had a remarkable career in wrestling. He went undefeated for 15 years, was the first inductee into the WWE Hall of Fame, has a trophy awarded in his honour and for 20 years held the record for the most spectators for a wrestling match: 93.173 for his mythical fight against Hulk Hogan at Wrestlemania III. This fight marked a turning point in Andre’s career as he was beginning to suffer from his condition. Andre also appeared in films and TV series, notably Conan the Destroyer, with Arnold Schwarzenegger and basketball player Wilt Chamberlain (photo above). He also had a good role in the acclaimed Princess Bride and has appeared in series such as The Three Billion Dollar Man. 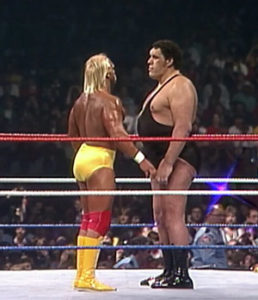 What did Andre the Giant suffer from?

Andre suffered from acromegaly. Acromegaly is a hormonal disorder that causes limb lengthening and facial deformity. It also causes early death. This partly explained her atypical physique. This disease coupled with his imposing frame created the endearing giant we know. But also his untimely death at 46.

Why was Andre so loved?

Andre was one of the most appreciated “sportsmen” of his generation. His physique first of all, but also his charisma and kindness built his legend. He represented the gentle giant of the popular imagination, even if he knew how to be badass in wrestling. It is for these reasons that he played the role of the gentle giant in the film Princess Bride. He also had, without intending it, a major influence on street art.

Andre the Giant and Obey Giant

As a student, the future world-famous artist Frank Sheppard Fairey decided with friends to launch a street art campaign: “Andre the Giant has posses. 7’4”, 520 lb”. The campaign started with stickers printed and spread around the city. The campaign was a humorous nod to the hip-hop counterculture. The influence of the campaign spread beyond borders and thousands of stickers were scattered around the world. In 1998, threatened with legal reprisals for the fraudulent use of the registered term “Andre the Giant”, Frank Sheppard had to act and change his artistic strategy. He then created what was to become one of the strongest symbols of street art worldwide: Obey Giant. This creation aims to parody capitalist propaganda. The image features Andre’s face and the famous ‘Obey’ underneath. Since then, the image has been found all over the world in every conceivable form (a map listing them is available on this link). 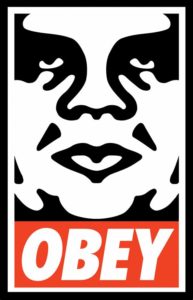 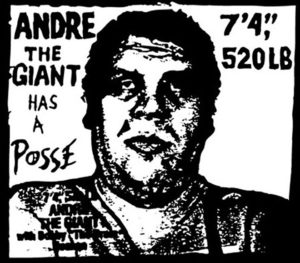 What was the strength of Andre the Giant?

Andre the Giant was incredibly strong. Many testimonies attest to this. His brother said that he could do the work of three men in the fields when he was only a teenager. Arnold Schwarzenegger, though a beautiful baby, told of the time Andre picked him up as a child and put him back in his chair while he was paying the bill in a restaurant. Many photos show him lifting cars. His former promoter once said: “Once I had a flat tire in a Simca 1000, it was Andre who did the jacking”. Other photos show him lifting wrestlers and throwing them in the air like balloons. Andre the Giant was reportedly not a gym-goer, so much the better for his opponents, it could have been worse. However, his special diet must have helped him to have this Herculean strength. 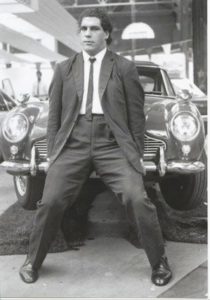 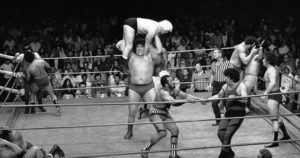 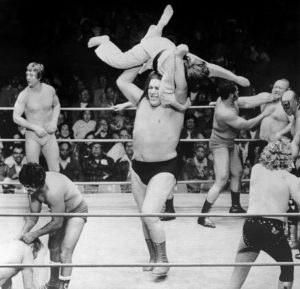 What did Andre the Giant eat?

Andre ate a lot, his capacity to eat everything was beyond comprehension. His manager at the time said, when Andre was disturbed at the table by someone: “I’m going to order the menu and if I eat it all, the bill is for your arse. Which was the case. Andre also consumed a lot of alcohol. 7000 calories of drinks per day to be precise. A wrestler friend, Ric Flair, says they once emptied a plane’s supply of vodka on a 747 flight. Andre also used to drink six bottles of wine before entering the ring. He often drank over 100 beers in a short space of time. Tim White, a referee and friend, said he sometimes ate 15 steaks and 12 lobsters in a restaurant. Enjoy your meal. 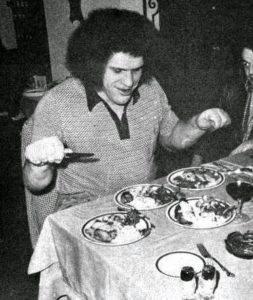 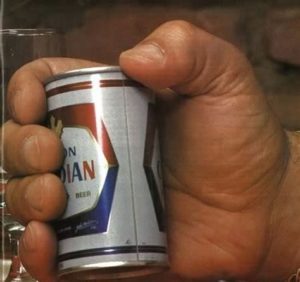 How did Andre the Giant die?

Andre died of heart failure on 27 January 1993 in Paris. He had returned to France to attend the funeral of his father who had died a week earlier. He was found dead in his hotel bed. His name appears on a stele with his parents. His ashes were scattered on his property in North Carolina, in accordance with his wishes. A video of his funeral can be found at the end of this article. 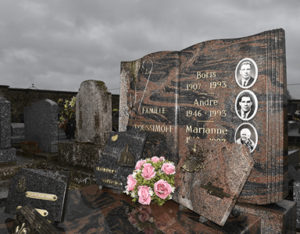 Some anecdotes about Andre the Giant 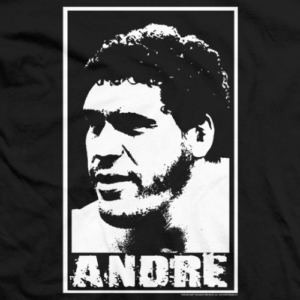 We hope you enjoy this first presentation of Legendary Giant. More to come. As we explained in the previous article, Andre the giant inspired the Wetall logo. We wanted to pay tribute to him through this one. Feel free to leave us comments about Andre. You can also tell us which legendary giants you would like to see in this section. In the meantime, enjoy some photos, videos and external links about our favourite giant.

See you soon on Wetall!

Samuel Beckett and Andre the Giant knew each other source

Andre the Giant, the greatest drinker of all time source

Other anecdotes about Andre and alcohol on this link and this link 2.

If you want to read a very nice anecdote about flatulence, this is the place to go.

Videos on Andre the Giant

Andre The Giant – A Big Man With An Even Bigger Heart

Andre the Giant – Larger Than Life – The Documentary

Hulk Hogan vs Andre The Giant (The Main Event) 1988

André The Giant’s big appetite for food and thirst for alcohol.

Shepard Fairey: Obey 1998 Interview: “‘The originator of the Andre the Giant thing.'”

Photos of Andre the Giant

You thought you had problems with transport?

You thought you had problems with your car? 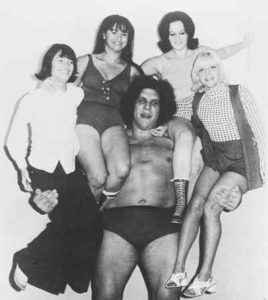 Andre supports the women’s cause in his own way

During the filming of Princess Bride 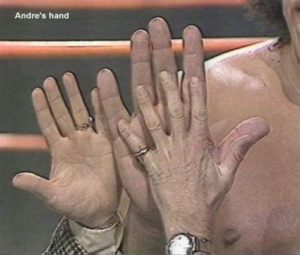 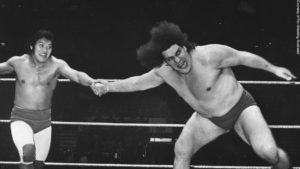 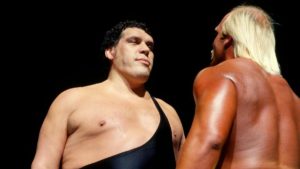 The fight of the century

Find a product suitable for adults: